Hotel Zelená Lagúna is a perfect place for relaxation, but if you want to put on your wandering shoes and need a change of pace, the region offers many attractive excursions.

Jarabinský prielom is a beautiful river-karst, canyon-shaped valley with the length of 800 meters. The valley is located close to Jarabina village. The breakthrough which was created by the activity of the stream Malý Lipník is partly narrow and partly wide.
The narrowest place is less than 3 meters wide. The stream flows trough a narrow rocky route, where you can see various interesting natural phenomena. You can see there rocky pools with a huge depth. Those places once were called bottomless. There are also shallower ones, called baths. The valley is surrounded by rocky walls, 10 – 20 meters high. Those walls include Jarabinské pece (furnaces)
In the rocks of Jarabinský prielom (breakthrough) there are a lot of fossils. One interesting and quite visible sign is a vegetable inprint with the length of 20 centimeters.
Jarabinský prielom is noted as a nature preserve because of its unique value. The breakthrough is accessible from the Jarabina village. The hike is not hard and suitable for families with small children.
More information

The Lookout Tower is located in the town's forest park at the top of Hradová hill on the northern edge of Košice at 466 m above sea level. The lookout tower provides a wide overview
of the Košice basin, the Hornádska valley and the city of Košice, surrounded by mountains.

The tower is a 21.5 m high steel structure complete with wood, which is used as the flooring. The four-legged base has a cantilever structure with three observation terraces at a height of 10.8 m, 13.6 m, 16.3 m. The observation platforms are protected by a wooden pyramid roof with a tin cover. There are four relief maps with the highest peaks in the surrounding area. Visitors can find very easily Bradlo (840 m above sea level), Čečatovú (773 m above sea level), Makovica (981 m above sea level), Dargovský priesmyk (473 m above sea level), Kojšová hoľa (1246 m above sea level) and other places. The tower is built on the site of an old wooden lookout tower from 1909 called the Rákoci Lookout Tower. You can get to the tower by footpath from the Košice - Kavečany state roadway in about 20 minutes. At the parking place, visitors can refresh themselves in the „buffet under the tower“. Only a few meters below the tower there are the ruins of a medieval Košice castle with a unique triangular bastion and there is also a playground for children.
More information

Údolie smrti is located in the northeastern part of Slovakia, in the Svidník district, between Kapišová, Kružľová and Nižná Písaná.
The valley is created by the Svidnička stream in the Ondavská vrchovina.
The tank battle in the Údolie smrti (valley) is considered the biggest tank battle in Slovakia. The valley got its historical meaning in autumn 1944. Althought the event contributed to the victory of the Russians, Carpathian-Dukla operation can not be considered a success because of the huge loss of life. In the battle in Dukla, tens of thousants of soldiers fell on both sides. German artillery batteries fired about 75,000 shots against the Russians and as a result of the fire all Russian tanks in the Údolie smrti (valley) were destroyed.
Villages in the valley were almost totally destroyed. Some people said that the stream was flowing with blood for a week.
In the area of those villages, there is a tank field which depicts tank company in the attack, which makes the whole area very interesting. The depicted tank company consists of 8 tanks T-34/85. When the visitors see the depicted tank company in the attack, they can easily visualized the historical tank battle. If you enter Údolie smrti (valley) from Svidník, you can see the well-known memorial. The memorial consists of 2 tanks – a Soviet T-34/85 is symbolically on the higher pedestal with its barrel aimed at the hostile German Panzer IV. More information

Beautiful opals from Dubnice opal mines, which are located in eastern Slovakia are admired all over the world. Nowadays the mining works are taken up by a tourist locality and a technical monument.
Opal mines have been well-known since the 16th Century. The largest opal, named Harlekýn was found in 1775 at the bottom of the Červenica stream. Its weight was 594 g and it was valued 700 thousand Dutch guilders. Today, the largest opal is located in the Vienna Natural History Museum. It is possible the opal was mined here during Roman times.
The golden age of opal mines near the village of Červenica today is preserved in the renovated entrance of the Jozef shaft.
More information

The historical park in Trebišov is one of the largest and most exquisite parks in Central Europe. It is one of the most significant memories of society and culture from the last centuries. At the same time, it is a documentary of the ethical relationship of past, present and future generations.
It covers an area of 62 hectares with 20 species of conifers, 40 species of deciduous trees and 20 species of shrubs.
The first reports of planting and adaptation come from the end of the 18th century and are related to the completion of the building of the mansion done by Imrich Czáky in 1786.
At the end of the 19th century, this park was considered to be the most beautiful in the whole of Hungary. It represented the culture and wealth and property More information

In Herľany, there is a cold geyser, which is an European rarity. Similar geysers are only in Iceland. The geyser was found in 1870, when the spa administration of Herľany decided to search for richer sources of mineral water.
It was activated artificially, by drilling to a depth of 404.5 meters. The geyser has its intervals of eruption (about 32-36 hours). More information

Discover the beauty of Slovak Paradise - one of the most beautiful areas of Eastern Slovakia and the Spiš region.
This unique piece of nature was so named because of its precious natural values and beauties.
It consists of preserved karst plains, deep-cut river canyons and gorges with magical waterfalls, an extensive underground world of caves and abysses and rich fauna and flora.
Welcome to Slovak Paradise, paradise of lovers of nature, hiking and sports.
More information

The High Tatras and its area provide visitors with a wide range of opportunities for trips during summer and winter season aswell. Not only families with children or tourists will enjoy this place, but also lovers of history, natural beauties, active and passive visitors.

In the heart of the Vihorlat mountain, at 609.2 m above sea level, you can see one of the most beautiful natural lakes in Slovakia – Morské Oko.
Morské Oko is undenniably one of the jewels of slovak nature.
To protect its natural values and beauty, the lake, together with the surrounding forests, was declared a state nature reserve in 1984, now it is a national
nature reserve.
More information

Solivar is well-known from the 17th Century
The stone-mining and salt-pumping objects in Solivar include, in particular, the Jama Leopold (shaft), black brine tanks, smelters, brewhouse, salt storage chamber, blacksmith's workshop and a knocker. Jama Leopold was the central piece of art.
The original area of Solivar included salt baths, engine room, railway yard and others.
We can mention the turbo knocker, which had the function of a knocker. By knocking on a heavy wooden board the workers were announced the beginning of a shift or other significant events (natural disastrous and so on). After the 1st world war they stopped using it. In 2001, the Slovak technical museum opened in the boiler-building objects an exhibition entitled THE devices OF MINING AND SOLIVAR SALT PRODUCTION. The Solivar production complex is unique; There is no historical industrial site so well preserved in sphere of technical memories in Slovakia.

The unique museum of the U.S. artist whose parents originally came from this region. The unique and surprising collection of modern art is a must-see for every art lover. More information 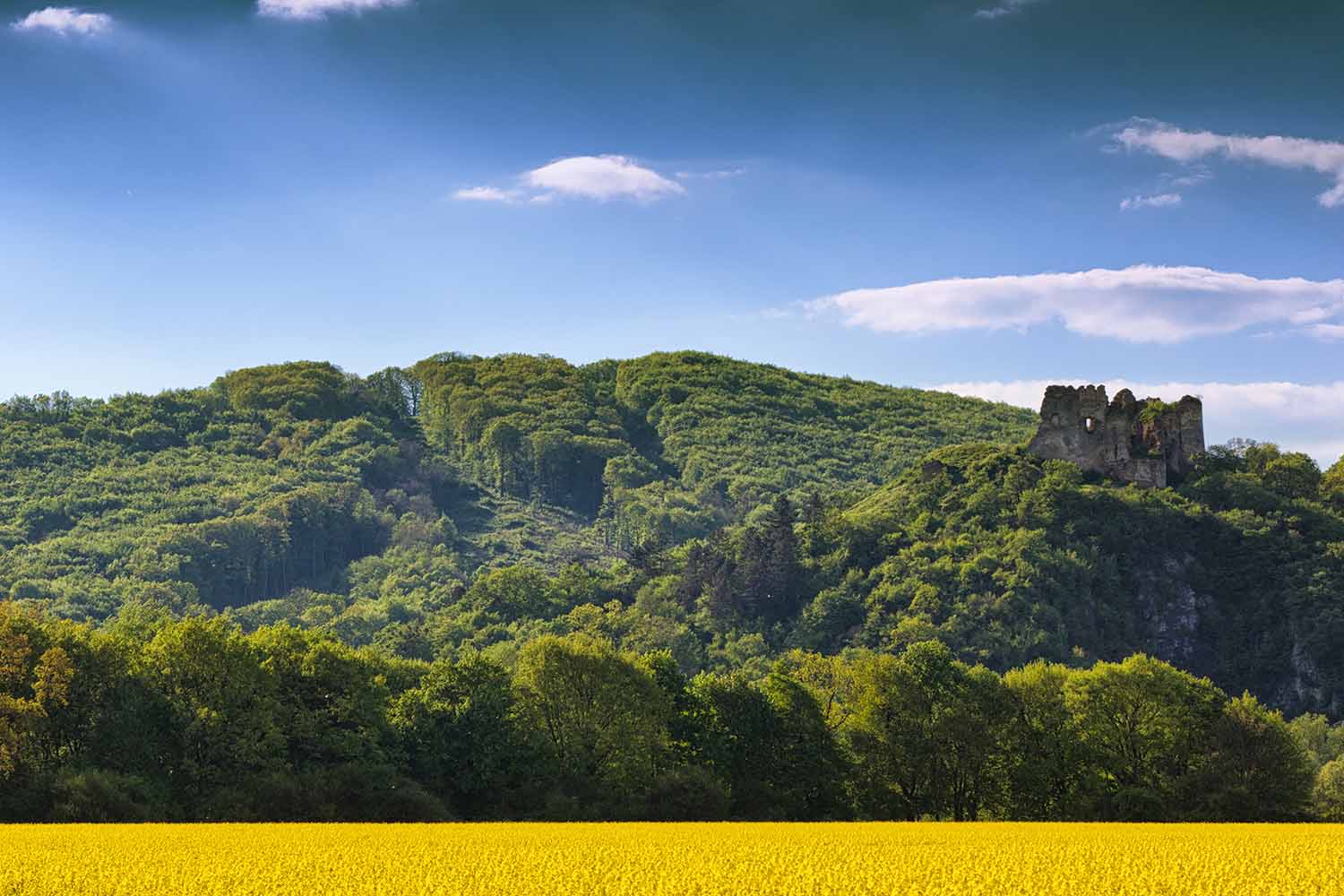 Slovakia is covered with castles and châteaux. Many of them have witnessed interesting eras in the region’s history. Their walls often experienced bloody sieges and court intrigues, and have been frequently used as the setting for captivating ghost stories. The eastern part of Slovakia is unique thanks to its beautiful castles and châteaux from various periods of history, often located in nearly pristine nature, and Hotel Zelená Lagúna is located in the heart of this region. Let your medieval pilgrimage begin. More information

A site with an emotional atmosphere, featuring a monument and cemetery for the members of the 1st Czechoslovak Army Corps. It holds the status of a national cultural monument. The monument consists of a stone pylon with a monumental sculpture and a ceremonial hall. The site captures the desolate atmosphere of World War II. More information 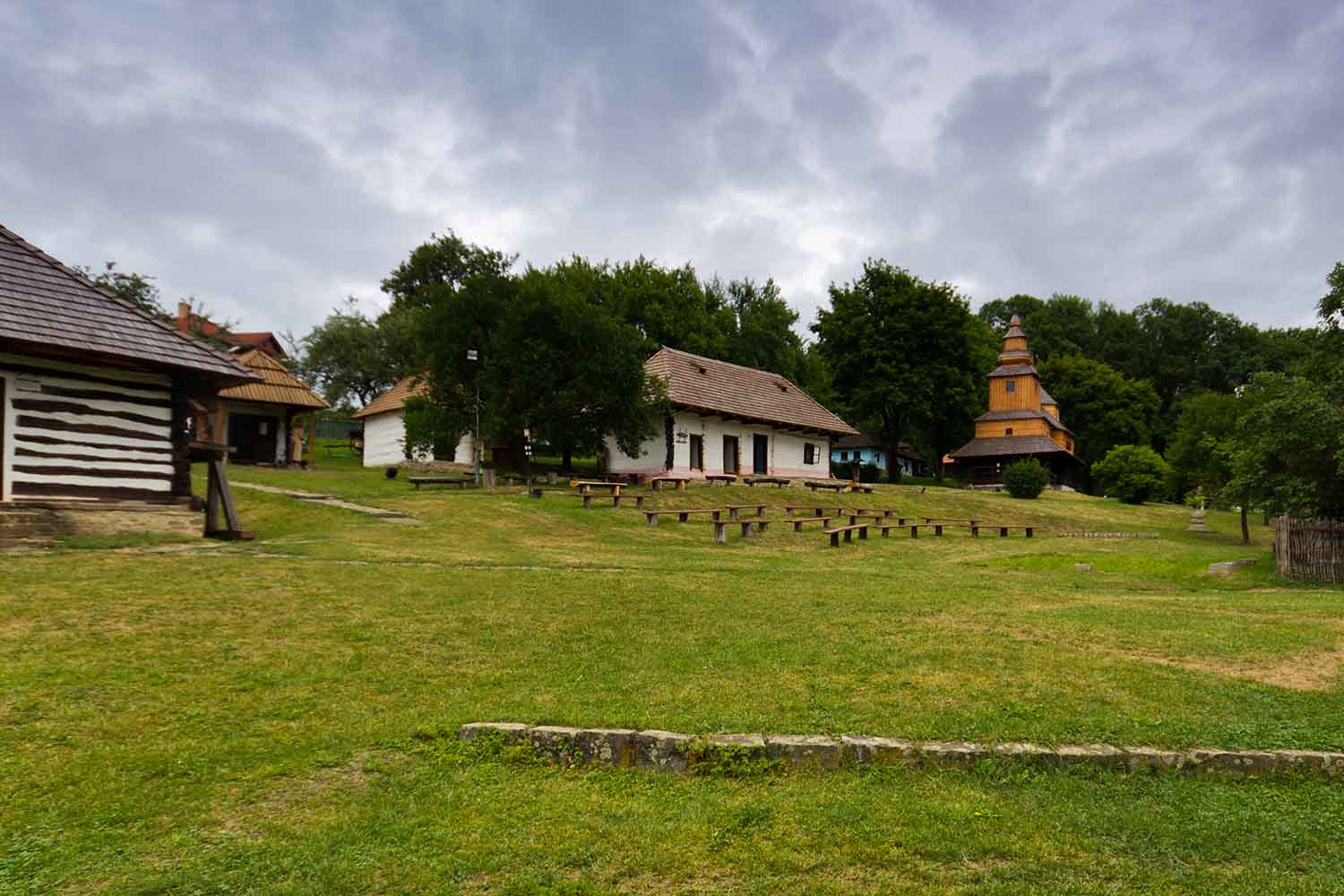 Hotel Zelená Lagúna is the ideal starting point for discovering the region’s unique wooden churches. These structures are located in various parts of Slovakia, but they’re largely concentrated in the East. These interesting structures were created solely with wood – not a single nail or screw was used in their construction. The oldest ones date back to approximately the 16th century. Among them are Roman Catholic, Lutheran, and Greek Catholic structures. A little piece of trivia: services are still conducted in some of the Greek Catholic wooden churches. Most of the churches hold the status of a national cultural monument, and the wooden churches of the Carpathian arc are listed as UNESCO World Heritage Sites. More information 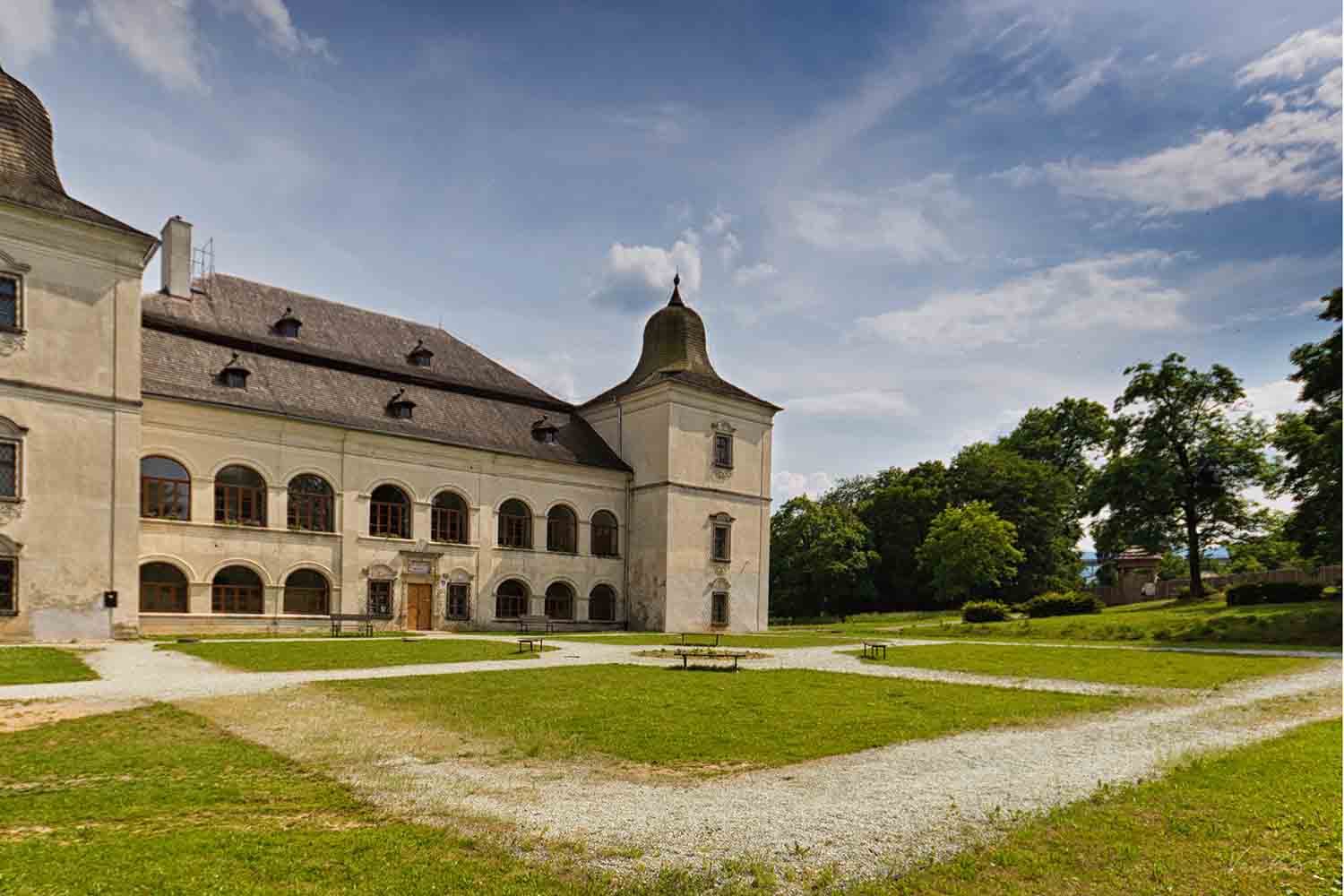 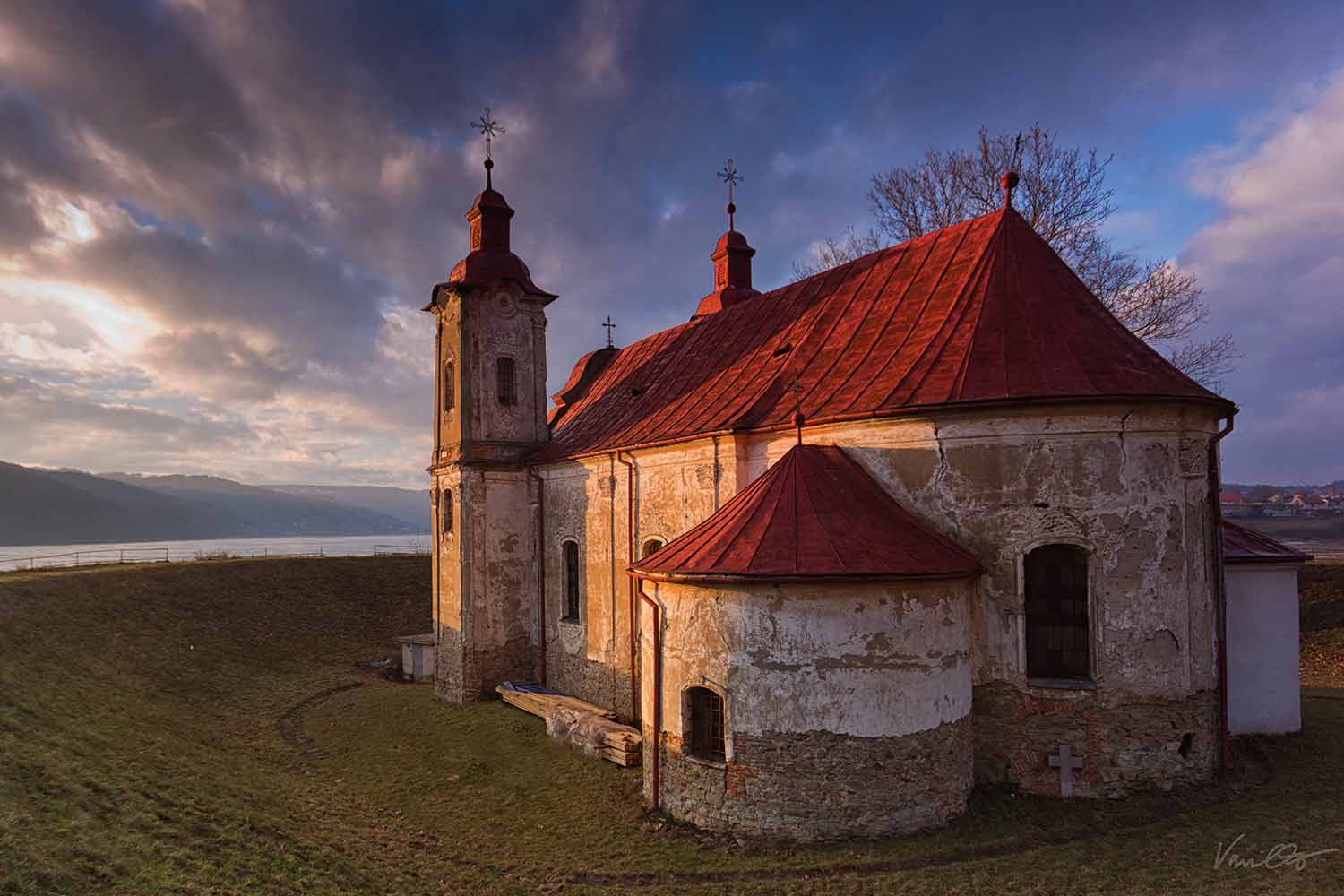 The town of Bardejov and its fortification system

Belonging to the list of most beautiful towns in Slovakia, Bardejov is inscribed as a UNESCO World Heritage Site. Visitors may be interested in the unique Gothic structures located in the centre and the town’s unique defence system – one of the most sophisticated and preserved systems in Europe. The cosy and hospitable town will win you over at first sight.
The hotel and its surroundings Trip suggestions
Up